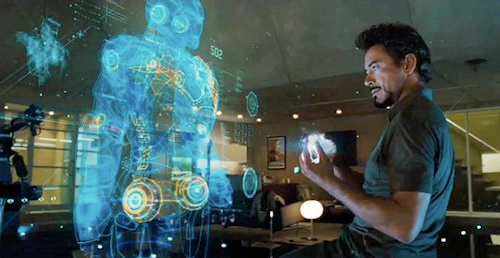 Augmented Reality (AR) has rapidly come to prominence in the last few years. At its simplest, it is using a device to project something computer-generated into the real world. It’s not replacing the real world as virtual reality does. There are two primary types of AR devices. There are wearable devices which depend on the human to wear them, and by detecting what the human is sensing it creates additional graphics, sounds, etc. The second type is an AR projector. This is a device that projects light into the real world in such a way that anyone nearby can see it.

One of the first big pop culture uses of augmented reality was the Iron Man movie series. Tony Stark often manipulates digital data in the real physical world. As seen in the picture, he examines a digital projection of the blueprints of his Iron Man armor in the real world, atop the desk in front of him. He can manipulate his projection physically, zoom in and out, decompose it, look inside the components, and anything else you can imagine, even though there is nothing physically there.

This kind of display has countless applications for allowing humans to examine things in three dimensions, in ways that normally you’d have to squint at a computer screen to see. Imagine doctors able to learn the human body by zooming in and standing millimeters away from bones and muscles, or even inside them! And imagine if they were able to perform surgeries that way. Their actions could be mirrored to a mechanical arm to perform very precise actions that a human could only see at 100x zoom.

There are also military applications, many of which you’ve probably seen in video games if you’ve played any recently. Imagine troops in the field having a visual overlay through a visor showing them heat signatures through walls. Or when calling for air support, being able to put a specific virtual marker on the ground and pilots being able to see the exact spot. All of this is technology that is being developed right now. While it looks cool, the biggest struggle is finding real practical uses for it that are worth the expenditure that these devices will cost to develop.

Here are some of the devices currently under development: